At one point I had an album on my Facebook page called “Unplugged.” It showed examples of how guests have “ruined” shots at weddings over the years. Posting that album was one of the biggest mistakes I’ve made as a professional.

You see, professional wedding photographers like to complain about a “problem” we often have at weddings.

As you can imagine, after shooting hundreds of weddings and having this happen over and over,  it can be a point of frustration, especially when it prevents me from getting a key photo.

In fact, this phenomenon isn’t just a problem at weddings. The cell phone camera has made millions of people unconsciously inconsiderate every day. Just recently I visited an aquarium and I couldn’t even get close enough to see the fish because people stood in front of the display with their phones against the glass taking pictures. It didn’t matter that they could just look up a picture of that fish on Google and look at it later, or that their picture was so blurry you couldn’t really tell it was a fish… they felt like they HAD to take that photo.Its the same way at weddings. It doesn’t matter that a professional photographer is capturing every second with stunning photos. It doesn’t matter that the photos from their phones are too blurry to see the brides face. There is an OBLIGATORY feeling that you should take photos at a few key moments at the wedding (Bride walking up/down the isle, first kiss, cake cutting, etc).

So at one point I thought it was important to EDUCATE guests about why they shouldn’t take photos at at wedding. I saw an article (check it out here) and I made a Facebook album about having an unplugged wedding giving my own examples. I wrote these thoughts a while ago and left the post as a draft on my blog. Today, a post went viral on Facebook, several photographers I know have been posting about how everyone should have an unplugged wedding. I knew it was time for me to publish this post.

Recently I realized how immature and unthoughtful I was being when I publicly complained about guests using cameras or phones at weddings.. I was complaining instead of being a professional and finding a way to handle the situation.

I also wasn’t realizing WHY people are taking those photos. My job as a professional is to always make people feel special, and feel good about themselves. My job as a photographer is to tell a story. I wasn’t telling the whole story with my unplugged album, I was using a few select photos to push my complaints on other people at the cost of making them feel embarrassed. So now, I want to tell the real story. Its a story of the magic of photography and it explains one of the main reasons I love my job. A grandpa from a recent wedding helped me to realize this story, and it wasn’t until I edited the ENTIRE wedding that I discovered this truth. So I guess its really this grandpa and me telling this story, and I before I start I want to say thanks to this grandpa.

But first, lets get this out of the way. I needed to realize this today.  I (as a professional wedding photographer) am not more important than your wedding guests. I know some photographers think their photos are the most important thing from the day. Even many brides will say those exact words. I’m here to tell you its not true. Yes… the photos are very important, but they only represent memories. A way to re-live that joy and love you shared on that day. If I get in the way of someone expressing that joy or love… I have failed.

You see, there is a reason behind the phenomenon I described earlier. That obligatory feeling that you should be taking a photo.

The fact is, we find joy in being creators. We also find meaning in documenting our life story.

Thats right. The reason I love being a photographer is the same reason you love taking photos with your phone. You are CREATING something beautiful through your own unique perspective. Something nobody else sees exactly the same way you do. Even a camera phone is enough to create wonderful works of art. I hate to even admit this, but I’ve seen a guest post a photo from a wedding ceremony that they took with their iPhone that was in some ways BETTER than the photo I took at the exact same moment. It isn’t always about technical perfection. Sometimes its about capturing a small piece of a memory from your own perspective so that every time you look at it, you are taken back to that moment when you took the photo. There is a famous photography quote that says “Every photo is a self portrait.” When you take a photo, you’re saying something about yourself and how you see the world.

Have you seen this video yet?

I love the words at the end. “A photograph is shaped more by the person behind the camera than by what is in front of it.” And, “Nobody sees it like you.”

One of my favorite emotions to capture is pride. There is no time when I’m able to capture that better than when someone is taking a photo of someone they love. You might see someone with a phone in front of their face, but I see someone who is wrapped up in a moment of pride that they want to cherish forever.

Finding meaning in documenting our life story isn’t a new concept. For thousands of years people have used the written language to express the things they experience. You know the saying, “A picture is worth a thousand words?” We now have the power to store millions of words in a small device that we carry everywhere with us. In a matter of seconds we can flip back and look through our visual journal that describes the events of our lives. We all know that someday we won’t be here anymore… and we want to leave behind a record of the things that mattered to us. Experiences, relationships, and emotions. All beautifully (although sometimes a little blurry) captured in those tiny pictures that we treasure.

Here is another video worth watching.

“Moments. We capture and share them. We carry them with us. We look at them and say, ‘I was there.’ ‘That’s beautiful.’ ‘That was Amazing!'”

So lets get back to Grandpa, because I think he really proves my point, and I want to share the ENTIRE story instead of an inaccurate piece.

In my album, I only showed this small part of the story. 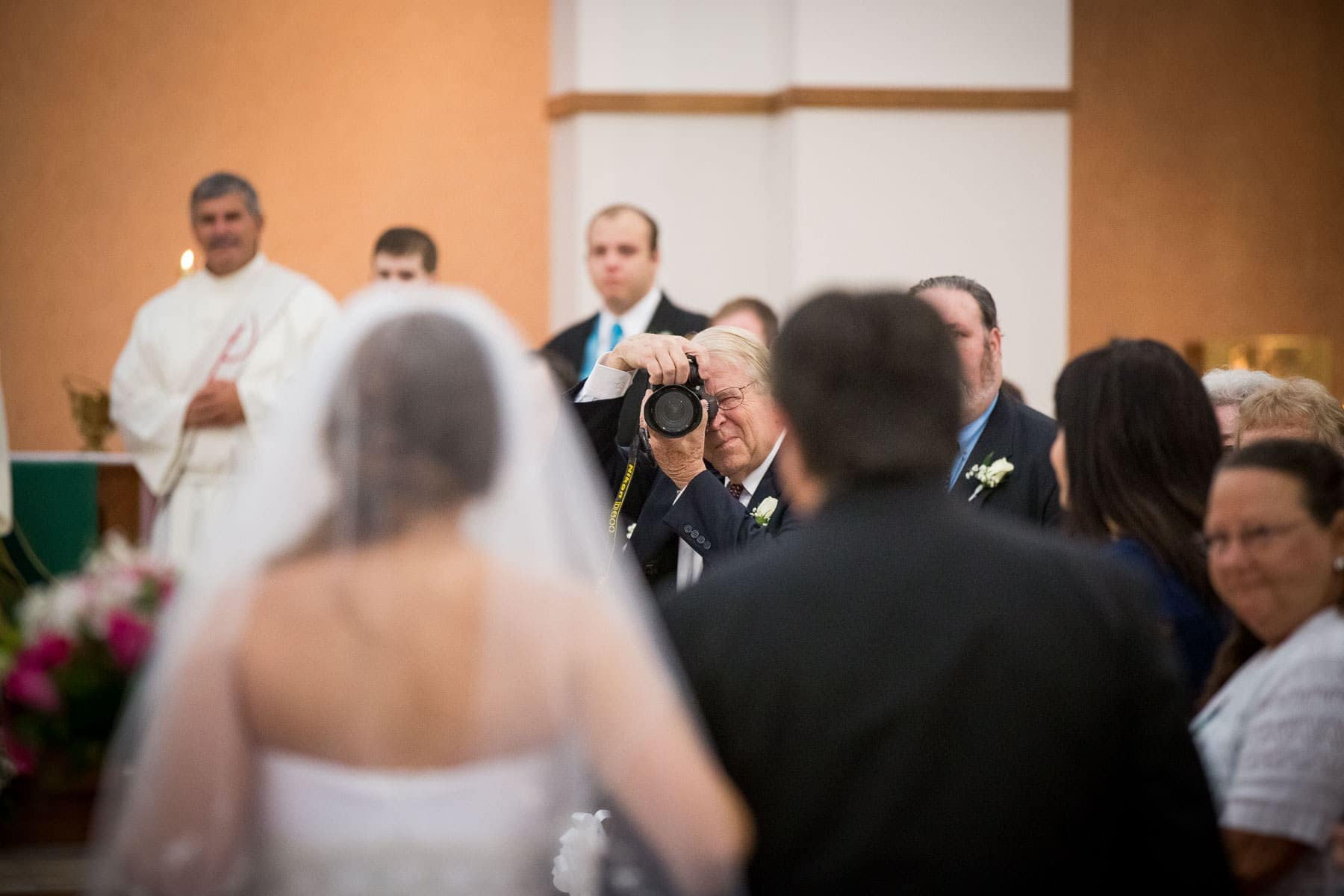 I left out the important fact that Grandpa didn’t ruin the shot… I was still able to get this. 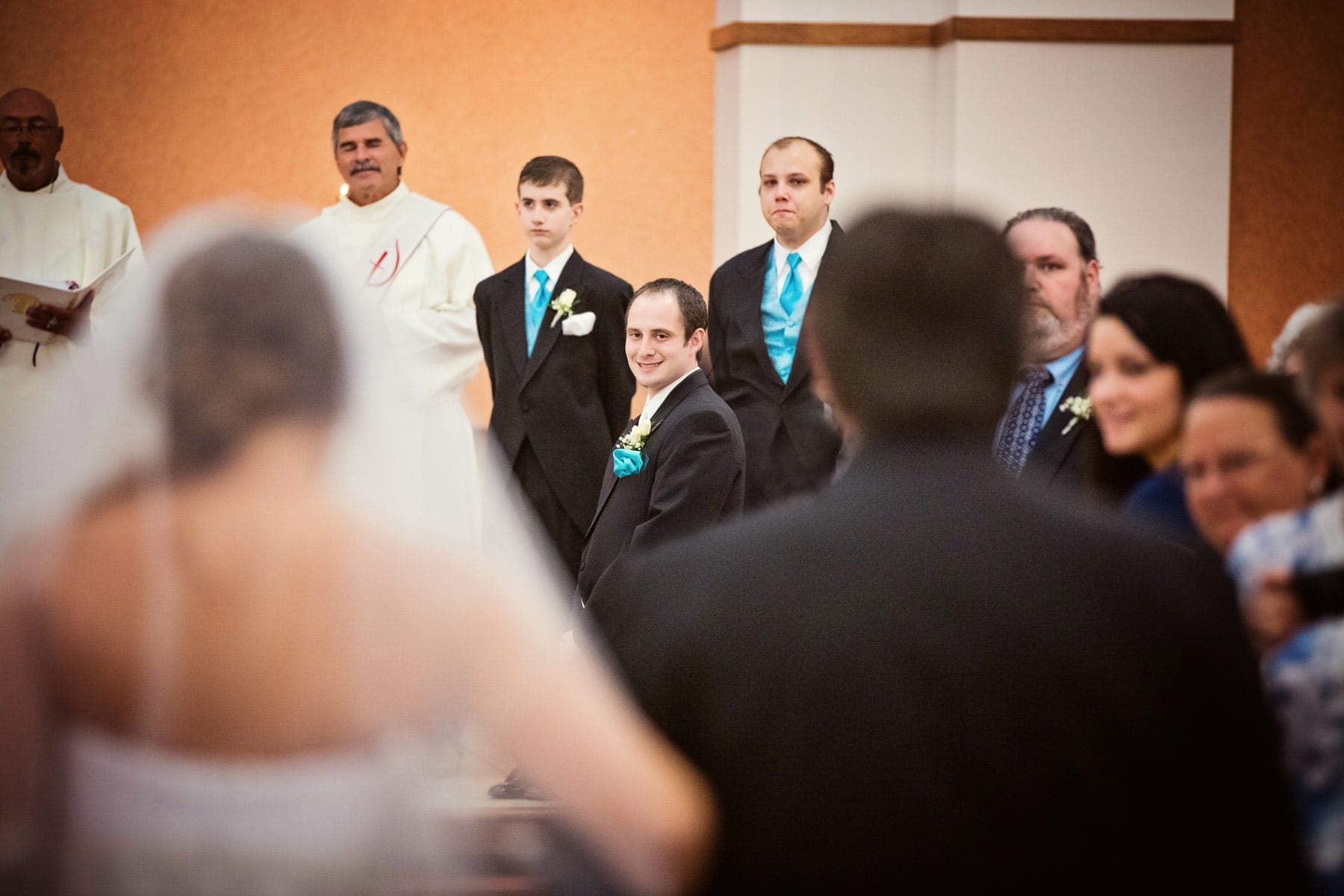 Later on is when I realized just HOW MUCH joy Grandpa finds in sharing the photos he has taken. The picture is great, but you should have heard the excitement in his voice. I can still remember it.

And maybe the best part of the entire story is this photo. Kids are always watching. This kid can see how much Grandpa loves taking photos, and what the kid is thinking here (even if only subconsciously) is “I want to find that same happiness he has when he takes those photos.” He’s saying “Teach me how to be a creator. Help me learn about preserving these moments.” That kid didn’t want to be like me… he wanted to be like Grandpa. 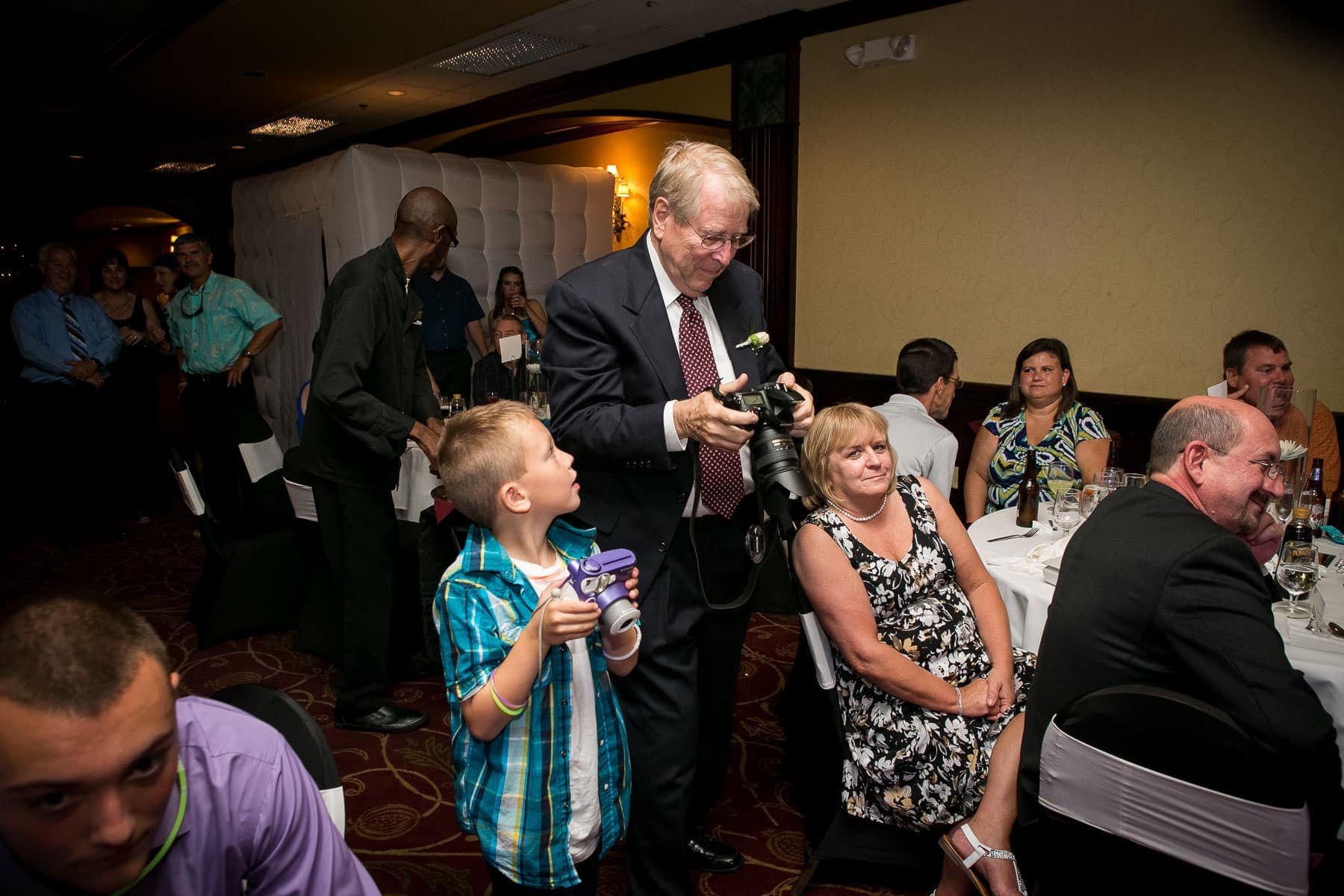 So I want to apologize for my immaturity. I can think of at least 3 specific times when I’ve posted something on Facebook that probably made someone feel embarrassed about taking photos at a wedding. Those people weren’t being unreasonable. They weren’t jumping in front of me and knowingly blocking my shots (yes, I’ve had that happen too). They weren’t trying to take over my place as the professional photographer (Yep, it happens). If I had embarrassed those people, I wouldn’t feel so bad. But I embarrassed the respectful, loving guests. They were just being creators. Telling their story from their own unique perspective. To those people, I’m sorry.

Keep creating. Keep documenting your life story. Its too important not to!

P.S. I do have one thing to ask of you if you’re a guest at a wedding.

I only ask that you have the same respect for the wedding that I have as a professional. That means not disturbing the ceremony, or any of the guests around you. It especially means not getting in the way of the bride and groom. Here are a few tips for you (some of the same rules I follow as a professional).

1. Don’t stand in the aisle. Ever. Not while people are walking into the ceremony or even when they are walking out. You’ll be blocking someone’s view. I frequently see guests step out in front of the groom, or the mother of the bride so they can take a photo while the bride is walking down the aisle. Make SURE that you are not blocking the view for anyone, but especially not the parents or the groom.

2. Don’t use flash during the ceremony. I can’t do it, so you shouldn’t either. Its very distracting and disruptive. If you can’t get a good shot without flash, just leave it to the professional!

3. Don’t make too much sound or movement. Even if you aren’t standing in the aisle, make sure you aren’t ruining the experience of the people around you. If you need to raise your phone up a little to take a quick shot, go for it. But don’t stand up and down or hold your phone up for extended periods of time. Take your photos, but be discreet. You won’t notice me during the ceremony, so I shouldn’t notice you either!

4. Be aware of the focus assist beam on your camera. If you see red, that means STOP. lol. There is often a little red light that helps your camera focus when it is dark. I can’t tell you how many times I’ve had guests shining that red light on a couple throughout their first dance or cake cutting. If you want to get a shot really quickly, you are more than welcome. But please don’t make the bride and groom red for an extended period of time.

5. Ask the bride before posting photos of her on social media. Or at least use discretion here. You would be surprised how often the couple doesn’t want anything posted online for various reasons. As a professional photographer, I’ve already been able to talk to them about these things. Again, use your judgement here, but I wanted to bring it up because some guests don’t even realize it could be an issue (I would have never thought of this if I hadn’t been to 200+ weddings)!
See? Pretty simple. No need to yell at everyone to leave their phones at home or tell them how they should or shouldn’t enjoy the moment. No need to go overboard trying to make sure that you have an unplugged wedding. These are some helpful tips on how to be respectful you can pass along to your guests.

Do you have an example of a photo you’ve taken as a wedding guest that brings back special memories?